Philadelphians will no longer be able to break out in their favorite line dances or reminisce about their favorite musical hits during the annual series of summer events hosted by Councilwoman Cindy Bass.

Bass, who represents the city’s eighth ward, announced in a tweet Wednesday that she was canceling the remainder of the event due to security concerns caused by the overwhelming threat of gun violence. The series began in June and was scheduled to end on August 31.

Bass said safety is his No. 1 priority and his office is working to replace the series with more appropriate community events that can provide safer spaces.

Since the series began, Bass and his office have held line dances at the Waterview Recreation Center every Monday and Oldies in the Park on Tuesday nights at the Jerome Brown Playground.

This week, the event series was set to begin a recurring Jazz Funk & Soul event every Tuesday at the Morris Estate Recreation Center. 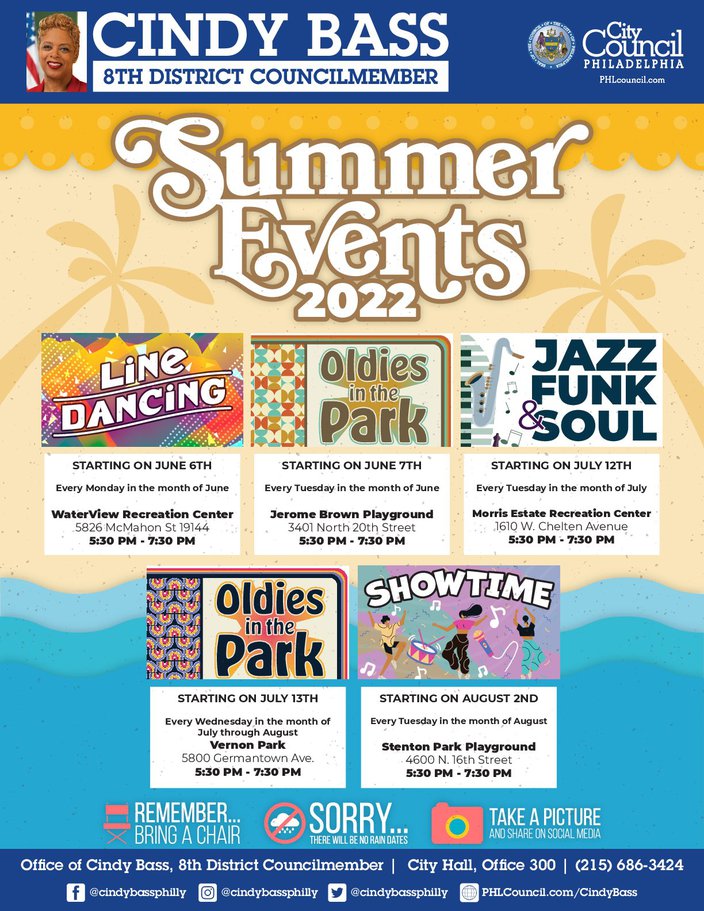 The community summer event series was canceled by council member Cindy Bass due to resident safety.

Bass said she is determined to continue working with her city council colleagues, the Philadelphia Police Department, anti-violence organizations and other elected officials to address the gun violence plaguing the city.

There have been 290 homicides in Philadelphia so far this year, and more than 1,230 people have been shot. On Wednesday eveninga quadruple shootout left eight injured, including a 2-year-old child.

Bass also said she is working on a new initiative that analyzes how to address the problem of someone in a home involved in the perpetration of gun violence, called “What if the shooter lives with you?”

The council member isn’t the only one canceling events this summer. On On July 8, the West Philadelphia Corridor Collaborative canceled a block party in Cobbs Creek after several incidents in the neighborhood.

President @RealJabariJones statement canceling the block party in Cobbs Creek scheduled for July 16 after a funeral procession was shot dead, killing 2 people in the blocks where the event is due to take place pic.twitter.com/3Lm7wDYnep

Karina Hill, Director of Finance for the Collaborative, said in a tweet that all sponsored events would be suspended until there was evidence of an appropriate police and security presence.